How to RECORD to make editing EASIER 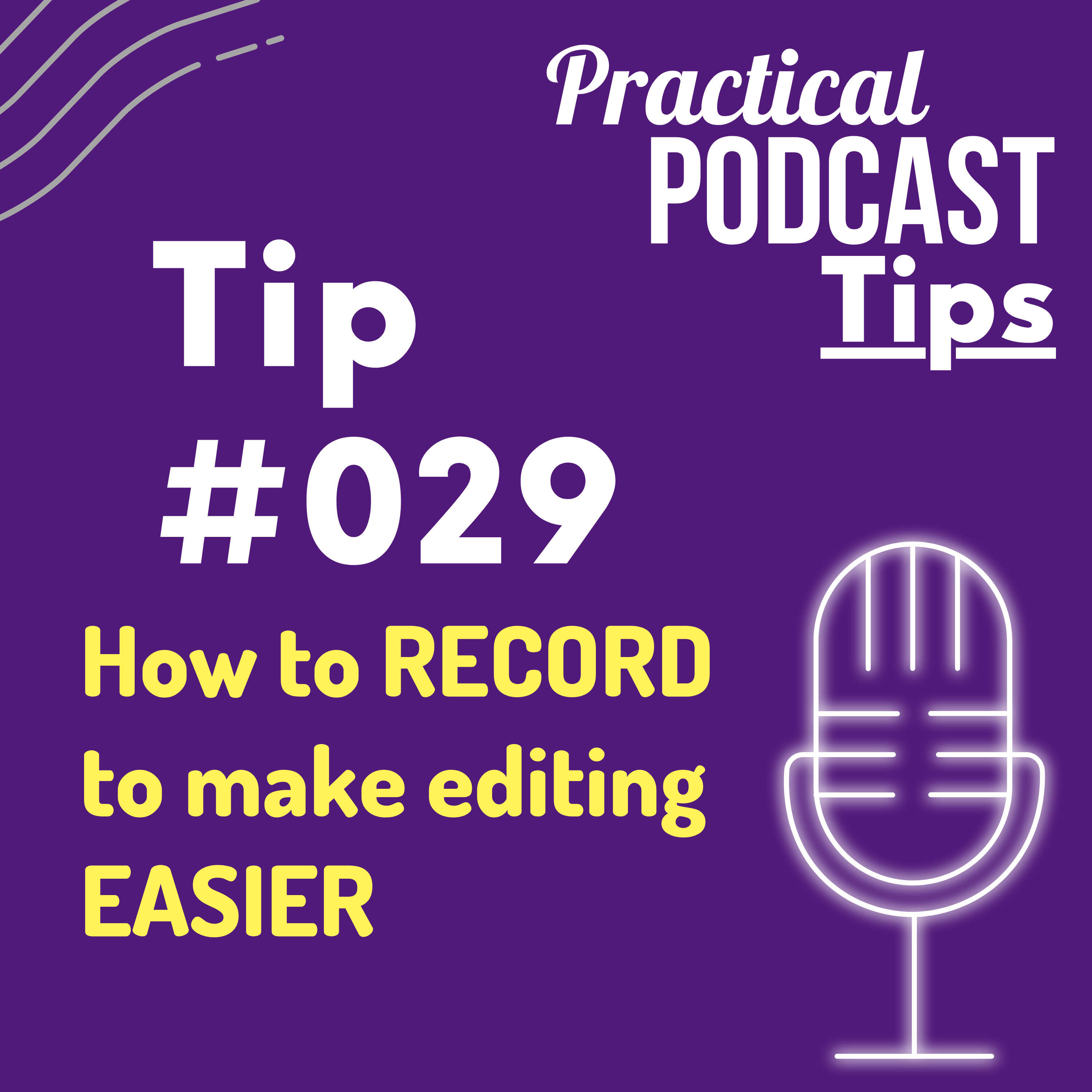 Learn how to record your podcast episodes so that your post production is easier. Amber gives some easy tips so that you or your editor have an easier time editing your episodes.

Learn how to record your podcast episodes so that your post production is easier. Amber gives some easy tips so that you or your editor have an easier time editing your episodes.

Amber Beels 0:02
Okay, you've decided that you want editing on your podcast. Great. Now what? Let's talk about that. You're listening to Practical Podcast Tips. My name is Amber Beels. And today I'm gonna cover tip number 29. How to Record to make editing easier. Editing can be tedious, especially if you're just learning the skill. So how can you make it easier for yourself or even your editor? Okay, so I hope you listen to episode number 26. I talks about if you want editing, if you want to do it yourself, or if you want to hire out, that's what we talked about in episode number 26. Hopefully you listen to it. And now you've decided ever I was editing. Okay, great. Now what do you do? Well, you have to record your episode. So whether you are editing your podcast yourself, or if you have an editor, these tips will help make your podcast sound smoother and just overall flow better. So it doesn't matter whether you're just doing it yourself, these tips will help just your podcast sound better. So here we go. So tip number one, have an outline. I know that seems obvious, but not everyone actually operates with an outline. There are some people that are like it, I'll just wing it, it'll sound great. Maybe you're really good at winging it, maybe you're one of those people that can just shoot from the hip. And they're like, Yeah, I got this. And it sounds great, right off the cuff. But most people are not like that. And you need something in front of you to just kind of keep you focused, just little bullet points just to have an overall structure for your podcast to keep you on track. And just to have an overall flow and direction of your episode. I have one right now, I have it right in front of me, I have my title of my episode, I have my intro. And I have my little bullet points just to keep me on track. Because sometimes I can go on a little tangent. So for those of you that are like me, and like to go off on little tangents, these outlines help a ton. Another tip is to say an important line, or a an important point twice, or at least twice, eight multiple times. So you know my intro, when I say you're listening to Practical Podcast Tips, my name is Amber Beels. Baldwin, that little intro, I say it at least two times, sometimes I'll say it three times. And the reason why I repeat it is to give myself if I'm editing my own podcast, or sometimes I have my editor, her name is Melissa, she's amazing. I give myself or Melissa options, because I say it differently in each take. And it's just nice to be able to say it just a little differently and see which one flows a little better, which one sounds a little more interesting, I may have fallen flat on one take or I may have messed up on another take, it's just really nice to have that option as an editor to be like, You know what I like the way this one sounds better. I'm gonna take this take. So if you have an important line, maybe your intro or whatever it is, try to say it twice and say it differently and see which one sounds a little better. Another tip is pausing. I would say pausing is crucial. And there's two reasons for this. If you mess up, pause, not only does it give you a second to kind of take a deep breath, collect your thoughts, and then say it again. But it also as an editor gives me a visual cue that something's going on. So if you are editing your podcast, you will see that there's waveforms on your timeline. And when you pause, the waveforms go flat. And that stands out. So it's kind of like a little red flag like, oh, something's going on here. So it's just really nice if you're going to be editing your own podcasts, or just really nice for your editor that you've hired to be able to see, oh, something's going on here. And maybe they repeat themselves. Maybe they messed up. Or maybe they just need a pause. But whatever it is, it's just visually easy to see on the timeline. So pausing, don't be afraid to pause on your podcast, especially if you're editing because you can cut out a long pause, maybe you just need a second, you take a drink of water, whatever it is, you can cut that out later and it's nice to have that freedom.

If something happens in the moment, say it in your recording. So like for me, I'm in my sunroom and I'm recording this episode and there's a lot of construction going on across the street. And I know that we can do a lot of really good audio processing to eliminate a lot of it. However, sometimes if there's like a big beeping noise because there's a big truck that's backing up I will say like, Hey, you know, I'm gonna pause right here because there's a truck beeping, or maybe we need to do a little extra editing, because while I was saying that line, there was a big truck beeping, or maybe I get interrupted, and I'm like, sorry, somebody just called me or, you know, whatever it is, don't be afraid to talk to yourself, if you're editing or to talk to your editor, and just be like, Hey, can you cut this out? Or hey, you know what I misspoke? I don't want that in my episode, can you cut that out. So it's just really nice, that when you're editing, you have that freedom to be able to talk and make kind of auditory notes as you're recording our episode. If you are interviewing someone else, and they mess up, you know, tell them beforehand that you are going to be editing this episode, or that you are having it edited by someone else. And that they have the freedom to be able to pause and re say something. Or if they mess up or misspeak that they have the opportunity to pause, and you have the opportunity and the freedom to be able to interrupt them, maybe they go on a little tangent and you're like, Okay, let's stop there. Maybe repeat what you just said. And let's get back on topic. And you can cut all that out later in post when you are editing the episode or having it edited. So it's really nice to just give your person that you're interviewing, just that heads up and letting them know that they have that freedom to make a note or to re say something. If you say, um, a lot, try to put a little bit of a pause, right after you say, um, now I know that can be hard, especially if you say, like a lot a lot, then that can be a little difficult. But just keep it in the back of your head that if you say on give a little pause. And the reason why is because it's a lot easier to cut out if there is that little gap. For example, if I say the cat is m black, there's a little gap between the word and black, I can easily cut that out in editing. But if I say the cat isn't black, and I say it really fast, then there is no real separation between the word M and black. And so it makes it really hard to cut out, you can cut it out, but it's going to sound jarring, it's not going to sound very good. So when you kind of catch yourself saying, um, just just give a little gap, just a little bit goes a long way to be able to cut out the um, and go on to the next the next word. So just keep that in mind. I know that people who say a lot that can be a little distracting. So I don't want to take away from the content of your episode. But just keep that in mind when you are recording your episodes. So those are my main tips for you. I hope this helps. The number one thing is don't overthink it. I know that sometimes when I'm recording my episodes, especially in the beginning, when I first started I was just kind of like okay, re saying a lot of things and you know trying to make it sound perfect, and it doesn't need to sound perfect. You just want to tighten it up and make it a little more concise. That's the point of editing is just to make it a little more straight to the point a little more concise, and just a little more natural. So I don't want to take away from you thinking about the content of your episode that definitely is more important than anything else in the episode. So don't overthink it. Just keep these things in the back of your mind. And again, it takes practice. So the more that you are recording and especially if you are the one that's editing your episode, you're gonna find that these tips really help and as you're editing, you're like Okay, the next time I do this next time I say, um, I need a bigger space. So as you practice, you will get better and it's gonna get a lot easier. So I really hope this helps. Thank you guys so much for listening, and I will see you guys in the next episode. Hey, thanks for listening. If you liked this episode, please feel free to leave us a review. It really helps out the show. And I'd love to hear how it helped. Also, if you know someone else that could benefit from it, go ahead and share it with them. Thanks again and I'll see you in the next episode.